OUR MISSION AND VALUES

The purpose of the Independent Authority for Fiscal Responsibility (AIReF, as it is known in Spanish) is to oversee the sustainability of public finances as a means for ensuring economic growth and the wellbeing of Spanish society in the medium and long-term. AIReF is a young public institution that started functioning on 2014. However, in just a few years it has built a solid reputation based on objectivity, independence and transparency with regard to its analysis and studies. Its mission is to guarantee effective compliance by Public Administrations of the budget stability principle set forth in article 135 of the Spanish Constitution through ongoing monitoring of the budget cycle and public debt.

AIReF’s professional and highly experienced team working on its staff endeavours to achieve the objectives established for the institution by publishing regular Reports, Opinions and Studies within the scope of its responsibility.

AIReF’s remit impacts key elements of all Public Administrations. As a result it directly affects decisions regarding public accounts and key expenditure and investment items such as education, healthcare and public works. Communication is therefore an essential part of AIReF’s activities. Independent Fiscal Institutions (IFIs) already exist or are being created in many countries around us for the purpose of having an independent authority to guarantee the sustainability of public finances.

The Independent Authority for Fiscal Responsibility, AIReF, was created as an institution with a duty to fulfil its mission on the basis of 3 key principles: independence, transparency and accountability.

AIReF operates with complete organisational and functional independence in order to carry out its purpose. Such independence is a prerequisite for success in its remit. Neither the President nor the members of its governing bodies or anyone else on the staff of AIReF may request or take instructions from any public or private entity.

AIReF sees transparency as a commitment to provide citizens with all the relevant information on its reports, opinions and studies as well as on the fundamentals thereof in an open, clear and timely manner. The institution will make public the methodology and criteria underpinning its reports, opinions and studies in collaboration with the various Public Administrations and international organisations.

Accountability is the third key element in AIReF’s activities. In addition to the President reporting at least once a year to Parliament, attendance at other parliamentary hearings is also provided for as part of a communication policy that reinforces this accountability in an open and continuous manner. AIReF shall be subject to regular external evaluation not only of its institutional reports but also of its own governance and organic structure and even its mandate. Its accounts shall also be subject to review by the Government Comptroller’s Office (IGAE, as it is known by its Spanish acronym) and the Spanish Court of Auditors.

AIReF’s staff is its main asset. All of the people forming part of the institution’s team have extensive experience and technical expertise in their respective fields of specialisation, making them well prepared to carry out their remit independently and objectively.

Our organisation is highly flexible and horizontal in structure, enabling exchange of know-how and information between its different divisions.

This is key to ensuring we can share experiences internally and strengthen our methodologies and capacity for analysis. 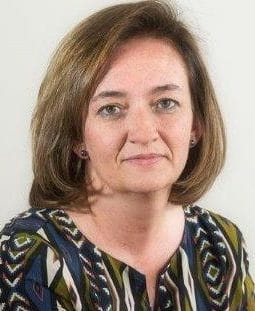 Cristina Herrero assumed the presidency of the AIReF on March 4, after the Congress unanimously accepted her proposal.

Cristina Herrero has been part of AIReF’s management team since its foundation. She became director of the Budgetary Analysis Division in 2014, becoming the head of one of the institution’s main functions as a guarantor of budgetary stability and the sustainability of public finances

The President of AIReF is appointed by the Council of Ministers on a proposal from the Minister of Finance. Prior to the appointment, however, the nominee must appear before the corresponding Commission of Congress, which shall endorse the candidacy by an absolute majority. Should the Commission fail to accept the nominee within 15 days, a simple majority vote cast by the competent Commission of the Senate would suffice to endorse the candidate.

The President of AIReF is appointed  for a non-renewable six-year term of office and is responsible for leading and coordinating all of our teams. His duties also include appearing before Parliament at least once a year to report to it on the institution and its activities (Article 24 of the Organic Statute of the Independent Authority for Fiscal Responsibility).

The organic law under which AIReF was created gives the President wide-ranging responsibilities relating to the organisation and governance of the institution and decision- making in all matters within the scope of its competences.

The President has a Technical Cabinet and a reduced staff to coordinate the work of the different divisions and carry out an open communication policy that provides the public with direct access to the work of the AIReF. His duties are listed in Article 25 of Organic Law 6/2013 of 14 November, on the establishment of an Independent Authority for Fiscal Responsibility and in Article 25 of the Organic Statute of the Independent Authority for Fiscal Responsibility.

The President of the Independent Authority for Fiscal Responsibility acts with total independence and objectivity as AIReF’s legal representative, directs and coordinates the activities of all its management bodies, exercises the most senior leadership over all staff, signs contracts and agreements and makes spending and payment orders.

AVAIABLE ONLY IN SPANISH

The AIReF team is governed by:

AIReF works under a commitment to be fully transparent in its actions and activities, offering a schedule for its Publications. The focus of all AIReF activities is the preparation of Reports, Opinions and Studies on the matters contemplated in the Spanish Organic Law creating the organisation. In addition, it will draft an Annual Report which will be widely publicized and disseminated. If you would like to access our Documentation Centre, you may do so by clicking on this link.

The Reports issued are those provided for by the Law.

Opinions formulated at the initiative of AIReF

Studies commissioned to AIReF by a Public Administration

AIReF’s Advisory Board was created in March 2015. It is formed by a total of eleven members who are appointed by the president of the institution for a three-year term from amongst professionals who are acknowledged experts in Spain or internationally and with at least ten years of experience in the field of economic, budgetary and institutional analysis. The organic law on the establishment of an Independent Authority for Fiscal Responsibility (6/2013) in Spain states that the President of the institution may be advised on the performance of his functions by professionals with expertise in subject-areas within its competences and may attend the management committees whenever he deems it appropriate for them to do so.

The ten members who have been appointed today to sit on the Advisory Board are: