The OECD releases the review of the AIReF 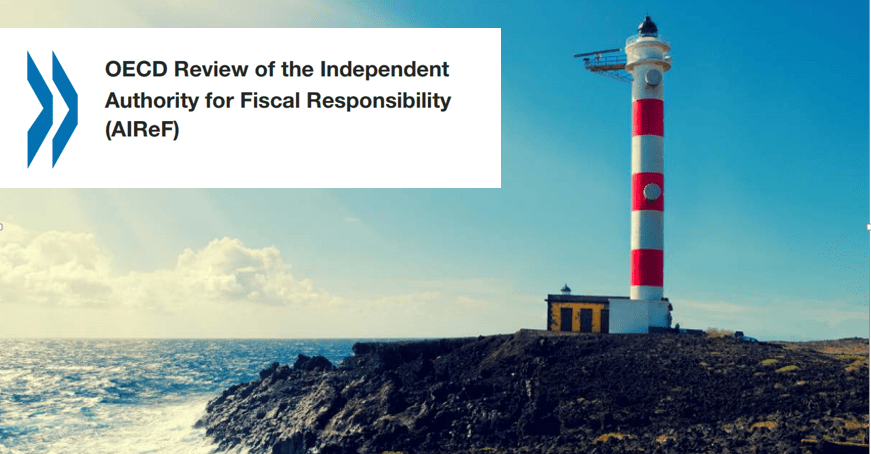 The OECD released on November 29th 2017 the review of the Independent Authority for Fiscal Responsibility, the Spanish Independent Fiscal Institution (IFI). In the executive summary of the report, the OECD explains that “the Autoridad Independiente de Responsabilidad Fiscal, known as AIReF, was established in 2013 as part of a national reform process with the aim of reinforcing the Spanish fiscal framework, meeting new European obligations, and restoring Spain’s public finances and setting them on a sustainable path”. “AIReF has a broad mandate to ensure effective compliance with Spain’s constitutional budgetary stability principle by public administrations at all levels of government. This includes continuous monitoring of the budgetary cycle and public indebtedness, as well as analysis of government economic forecasts”, says the report. “The mandate takes into account the specificity of Spain’s decentralised system and the breadth of AIReF’s subnational mandate is unparalleled among peers. Although AIReF is still a young organisation, it has established a reputation for independence and high quality analysis with Spanish stakeholders. Internationally, AIReF has also built a strong reputation among its peers in the European Union (EU), the OECD, and more globally. In particular, AIReF has led efforts by EU independent fiscal institutions (IFIs) to strengthen the EU fiscal framework”, explains. “The reviewers found AIReF’s work to be in line with good practice in terms of approach, rigour and transparency, as well as in comparison to peer IFIs, although it would benefit from more emphasis on the medium term. Stakeholders report that AIReF’s work has contributed to better fiscal management in Spain across the fiscal policy cycle. In particular, AIReF has helped generate improvements in economic forecast methods, the monitoring of budget implementation and early detection of non-compliance with fiscal rules. Subnational stakeholders view AIReF as an honest broker in national/subnational fiscal coordination”, remarks the OECD. “In relation to transparency, stakeholders across levels of government welcome the new economic and fiscal information provided by AIReF and note the contributions that AIReF has made more generally to promoting a new culture of transparency in Spain. AIReF has been effective in communicating its work, although there are some ways in which it could enhance its outreach. It receives regular press coverage around the release of key reports and its analysis is increasingly used in the parliamentary debate”.